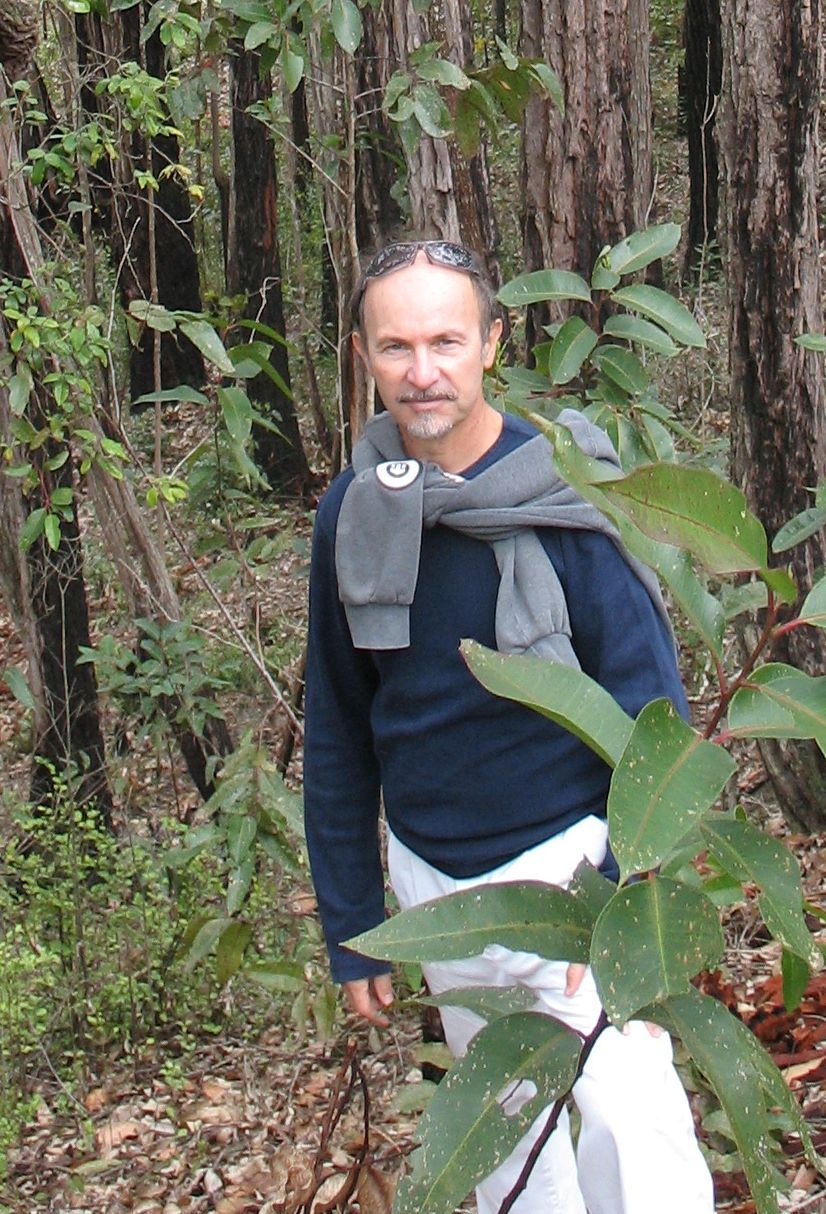 PhD in population and quantitative genetics 1995: National Institute of Agronomy and University of Paris XI

Master of Science in quantitative and population genetics 1991: National Institute of Agronomy and University of Paris XI

I am currently responsible for the Unit research team : "genetic and Breeding of perennial crop species"

Within an international network of private and publics partners, the GF&P team (Genetics and Breeding of perennial species: Forest and Oil Palm models) conducts research on plants with a long cycle, with the purpose of improving and creating varieties. Two genus or species are primarily concerned, eucalyptus and oil palm (Elaeis guineensis Jacq.). But, as regards forest trees, efforts also relate to other species, in particular the shea tree (Vitellaria paradoxa) and the argan tree (Argania spinosa).

The research activities of the GF&P team are directed especially towards four directions:

This approach should help identify alleles that may have potential for introgression in populations or improved varieties. In the case of eucalyptus, for example, it will be a phylogenetic analysis with genes involved in the chain of biosynthesis of lignin and cellulose.

It deals with genes or genomic regions involved in the development of traits such as resistance to pests and pathogens (Fusarium and Ganoderma on oil palm), the contents of lignin, cellulose and polyphenols (in Eucalyptus species), the levels of fatty acids and tocopherols in shea trees, the response to mineral nutrition (eucalyptus, oil palm) and resistance to water stress (eucalyptus).

This line of research concerns the response to environmental factors (biotic and abiotic ones) by characterizing phenotypes according to nested levels: complex characters, character components, chemical contents and expression products. The work will be conducted primarily for oil palm (resistance to Ganoderma and to Fusarium wilt, mineral nutrition and water stress) and eucalyptus (mineral nutrition, water stress).

These researches, which concern both oil palm and eucalyptus, will be used to get a better prediction of genotype in its environment by combining molecular data, phenotypic data and environmental data from sequencing and high-throughput phenotyping. They involve mathematical and statistical models applied to quantitative genetics and population genetics.

My main research fields concern the understanding of perennial crop adaptation through different levels of diversity expression (from genes to phenotypic traits). It also concerns the understanding of genetic structure of populations and gene flow through time and space.

I use the classical approach of the quantitative genetics to analyse the genetic and environmental components in tree adaptation for growth, morphological and wood property traits. In parallel, I conduct research on the effect of competition (density, fertilising) on the phenotypic plasticity of Eucalyptus.
I am now starting research on the molecular basis of adaptation (candidate genes, SNPs) along clinal variation for both type of species: Eucalyptus along altitudinal range and shea tree along rainfall variation. Identification of polymorphism in candidate genes and association tests combined with functionnal analysis of phenotypic traits are the main activities of the new projects. 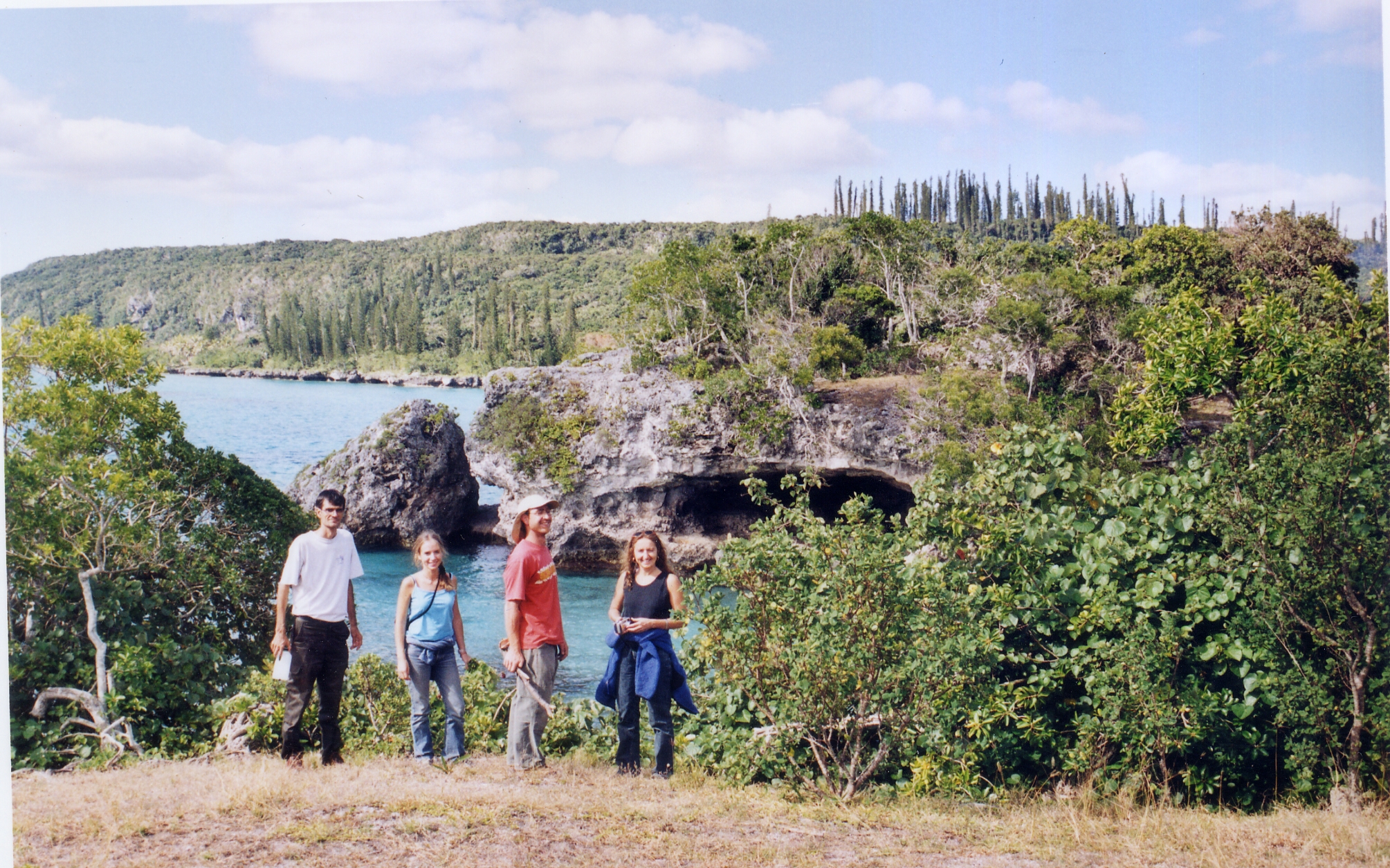 I have developped research to analyse the impact of global change on genetic structure and gene flow. I have mainly used chloroplast and nuclear microsatellites to study the impact of historical factor (last maximum glaciation), geographic factors (archipelagos) on the genetic structure. At the local scale I have studied the impact of human activity on gene flow and mating system.
I am now using Bayesian model to define populations and analyse gene flow.

I spent 20 years in tropical regions : Republic of the Congo, Madagascar, French Guyana and I made numerous missions in the countries of the tropical zones.

Since 2001 I have been based in CIRAD France, in Montpellier

I have conducted my research in different forest ecosystems and with different species of tropical regions. I have mainly addressed scientific issues in Africa (Republic of the Congo 1982-1984 and 1991-1998), in Madagascar (1986-1991), in French Guyana (1998-2001) and in France (2001-now)
I have developped most of my activites in the frame of Eucalyptus plantations in Africa and Madagascar. The operational goal is the production of clonal varieties of eucalyptus for pulp wood or the production of improved seeds for small scale plantations.

Then I have conducted research in the frame of agroforestry system, mainly in the soudano-sahelian region of Africa with species such as shea tree (Vittelaria paradoxa) and Acacia (Acacia senegal) for the production of non wood forest products (shea butter, arabic gum).

I have also developped some activities with species growing in insular system in New-Caledonia, in French Polynesia (Santalum sp.), in Caribbean see (Pterocarpus officinalis),in Madagascar island (Dalbergia sp., Ravensara aromatica) and in French Guyana (Aniba rosaeodora) to implement strategies of conservation and to develop the principle of management based on molecular and phenotypic information.

·       As part of CIRAD’s mission to develop research through cooperation with limited resource countries, I am heavily involved in the design of partnership strategies in multicultural contexts. In many situations, I have jointly developed research programmes of mutual interest, defined the rules for sharing the results and organized the research teams. To illustrate this, here are three examples of projects in which I am currently involved: defining a research programme with the University of Sao Paulo and Embrapa on eucalyptus plantations in Brazil, where two researchers of my team are stationed; with the National Centre for Agricultural Research and the University in Madagascar, assignment of a researcher to studies of the impact of global change of forest ecosystems; organization of the partnership strategy and research with French and Indonesian private companies for oil palm breeding in Sumatra. ·       I Also maintain contacts with international organizations such as the World Agroforestry Centre and the Forest Service of FAO. I recently (April 2011) attended a meeting of experts at FAO to define the work program of thematic issues in the State of the World of Forest Genetic Resources.

·       I have done audits and worked as a consultant in various fields of the management of genetic resources (technical and legal aspects), for example:·         Genetic improvement of perennial crop and tree species (implementation of selection schemes by a private company in Ecuador) ·         Strategy for the conservation of threatened species in French Guyana for Aniba rosaeodora in collaboration with French Forest Service and the Channel Group.·         Audit of research programmes related to plant genetics and biodiversity. This audit was conducted as part of IPGRI in 2005 to analyze the programme "Laws and Policies Affecting the Conservation, Use and Exchange of Genetic Resources for Food and Agriculture (project D11 of IPGRI). The audit was financed by the European Commission. Its main purpose was to review the progress made by the D11 project in 2003 in terms of the milestones previously defined and to evaluate accordingly the possible need for reorienting EC funding to these projects in the coming years. 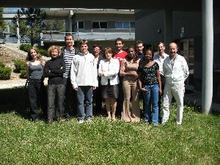 1 - Co-supervisor of the PhD thesis of Zenor Logossa: 2007-2010. University of Lome, Togo.
Impact of natural selection of genome structure of Vitellaria paradoxa (shea tree)- Pattern of variation of candidates genes coding for aquaporins along the latitudinal gradient in the Sudano-Sahelian zone 2 - Co-supervisor of the PhD thesis of Garel Makouanzi: starting date 2010. University of Brazzaville, Republic of the Congo. Epistatic effects  in genetic components of traits involved in response to stress in eucalyptus populations.

Coordination of national and international research projects·       I have been involved in assembling and coordinating projects involving several research teams. I have been involved in French projects with various partners(Universities, CNRS, INRA and so on), but especially in international projects through European funding. European projects have the characteristic of being highly multidisciplinary and combine biological sciences with social and economic sciences . As co-ordinator of Foreaim and Innovkar projects, my role was first to conceptualize research involving European and African partners who have different skills, resources, know-how and ways of exploiting the results. On the basis of a consortium agreement, my role has subsequently been to organize the implementation of research, to ensure the proper allocation of budgets, to lead the steering committees and to report to the European Commission (Directorate-General for Research).

2 - Project funded by the French Ministry of Ecology and sustainable development 2002-2006
Analysis of the genetic diversity of a symbiotic system in insular system, spatial and functioning aspects : case of Pterocarpus officinalis and of its associated micro-organismsInstitutions involved : UAG, CIRAD, LSTM
(participant) 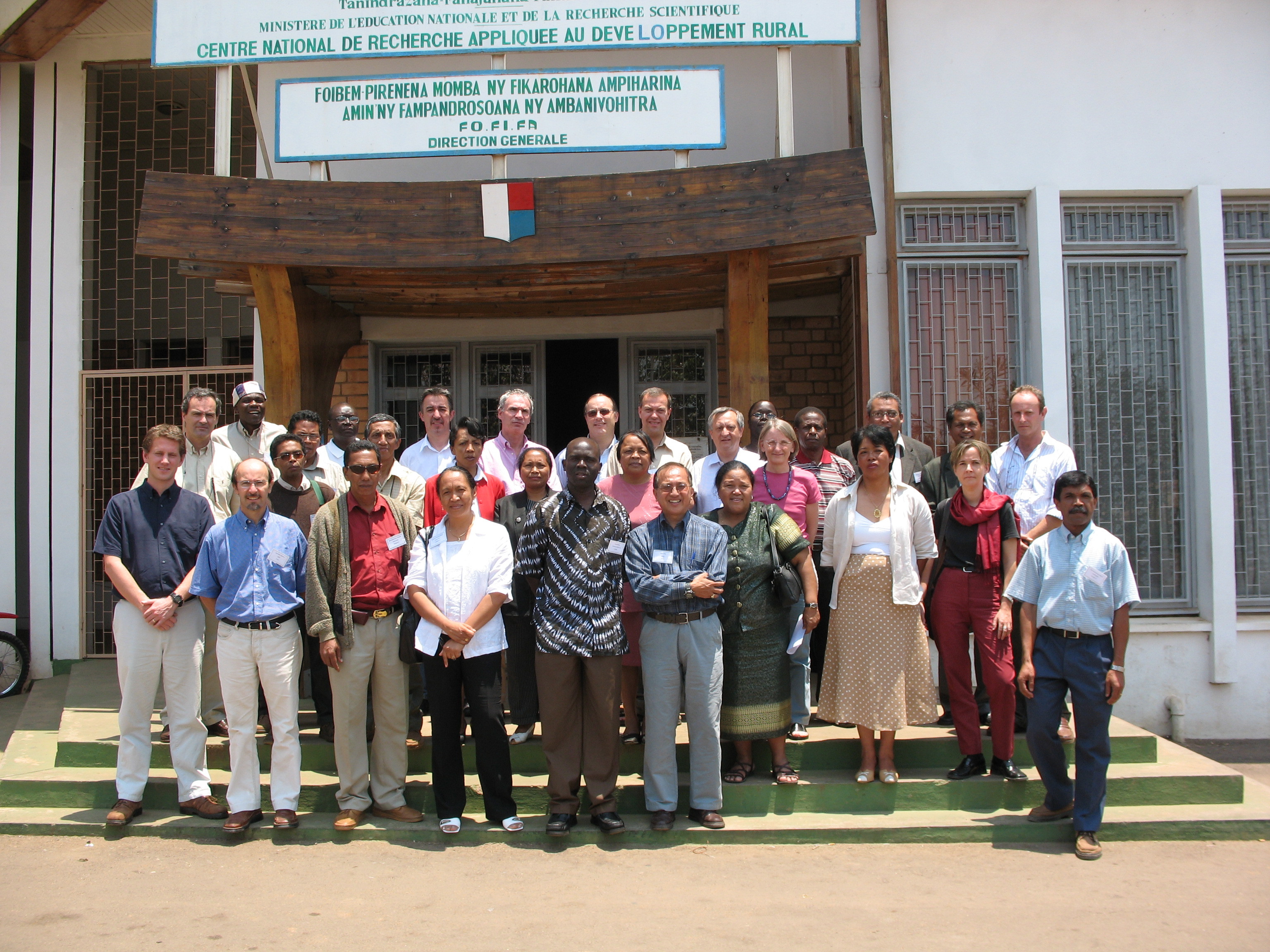 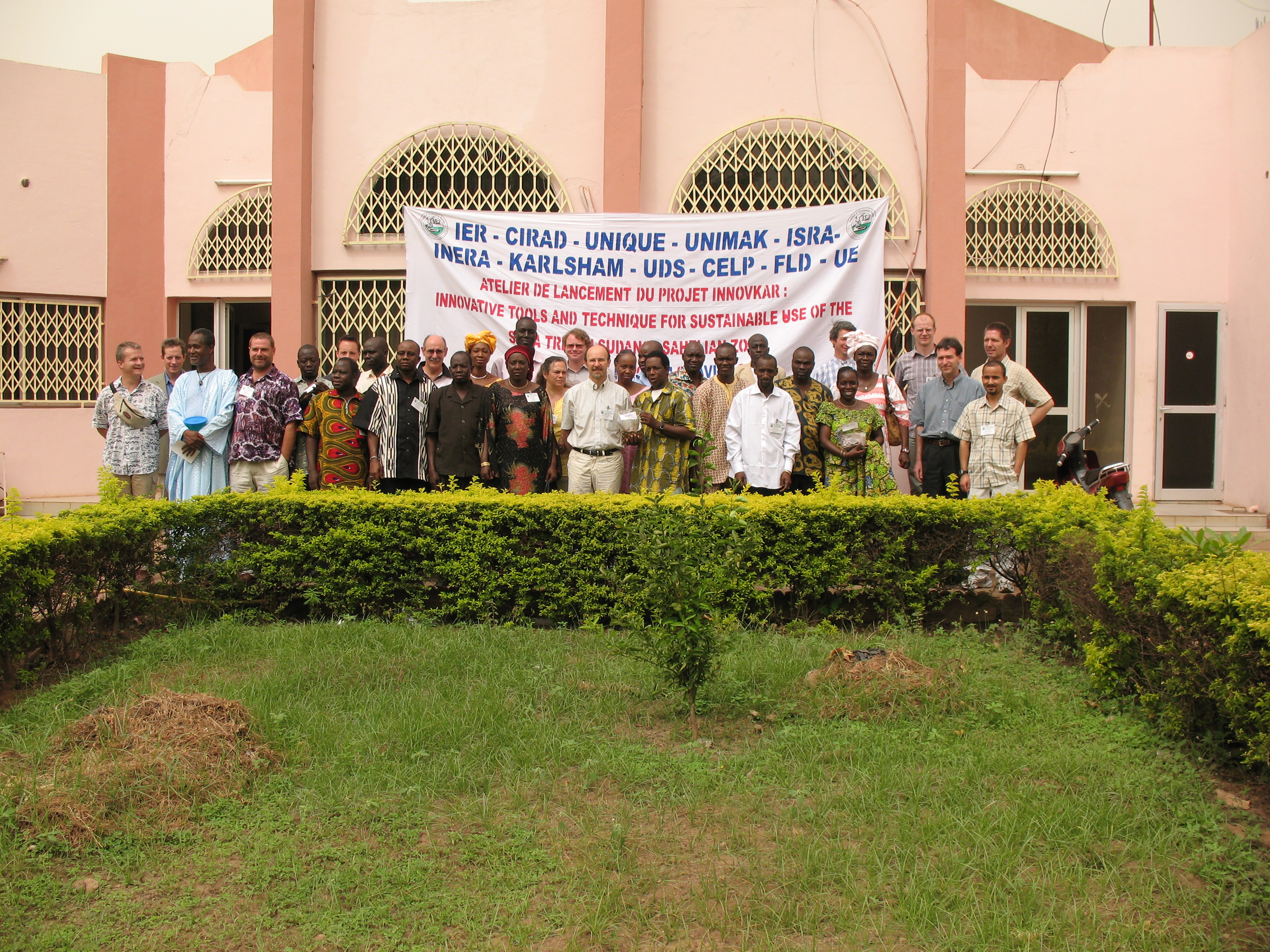 ·       I participate in various ways in the evaluation of research. I have participated in numerous panels and examination committees for PhDs and for degrees and diplomas in French and foreign universities (Australia, Madagascar, Mali). I also work as an expert for AERES (French Evaluation Agency for Research and Higher Education) and participate in committees that evaluate French research units

Andrianoelina Andrianaivo O., Favreau B., Ramamonjisoa L., Bouvet J.M. 2009. Small effect of fragmentation on the genetic diversity of Dalbergia rnonticola, an endangered tree species of the eastern forest of Madagascar, detected by chloroplast and nuclear microsatellites . Annals of botany, 104 (6) : 1231-1242.
http://dx.doi.org/10.1093/aob/mcp231